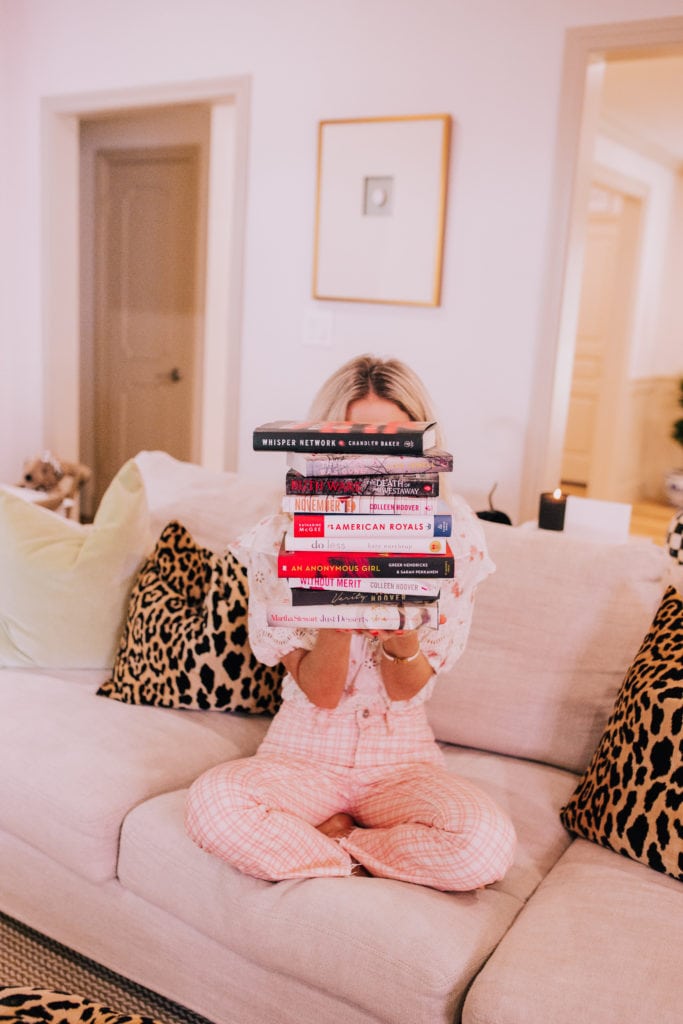 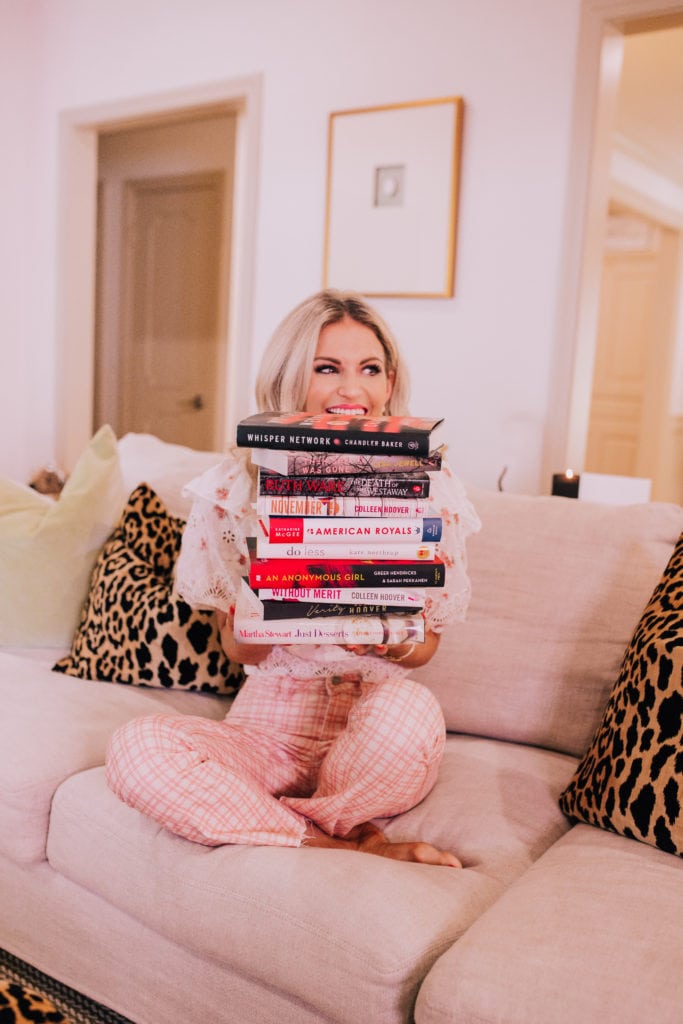 If there was one thing I did in Santa Barbara, it was read! The weather was such a treat, we found ourselves on a patio every few hours drinking a coffee and reading a book. I was able to get through two books off my fall list, so I thought it was time to list out what is in my nightstand for the upcoming season. I get through far more books in the fall than I do the summer with it getting darker earlier in the evenings and less time outdoors later at night. Plus, reading is just more enjoyable with a slice of pumpkin bread in hand, no?! Do you have a season you read more in?

I was able to finish this book in Santa Barbara as I’d been reading it for a few weeks. It’s set in Dallas, which made it all the more realistic to read. While it is fiction, it focuses on sexual harassment in the workplace and follows four friends in the corporate world. A lot of reviews said that if you liked Big Little Lies, you would like this, which is what intrigued me, and I would agree. It’s not as intense as Big Little Lies, but there are many similarities in style. I will say, don’t go into it expecting a thriller/mystery. It is listed as such on some reviews and there is such a slow build in the mystery plot that I would say it really doesn’t lean that way in terms of genre. I more so sat rereading the page and really understanding each character’s thought process while cheering them on. I know this may be a bit of a vague review and I just don’t want to give too much away. It’s a timely novel and I think one that any reader of COF would enjoy.

I can read a Colleen Hoover book like you guzzle water after workout out on a hot day. I read this in a day and was sad when it was over. It’s a romance, it’s a little cheesy, but it also has a great plot twist as most CH books do. I think if you are in an extremely busy season of life with work or kids, you’d probably enjoy November 9 for the sheer fact it’s an easy and interesting read. The plot also moves pretty quickly, so if you are something that doesn’t want a slow build, I think you’ll like this one a lot.

This is what I’m currently reading, and I just want to preface it with warnings some of you all sent me! I’m actually not sure if I’ll finish it just based on what some other women DM’d me, but I did want to note it is on my list. When I bought this book at the bookstore, the lady checking me out said it was the best book she has ever read, while another lady behind me said it was the worst. That tends to sum up how the reviews have been from y’all after I posted I was reading this. Many of you said there was a lot of disturbing violence and that this book should come with a trigger warning for moms so that in and of itself is probably enough for me to put down. A few of you said it was very different and dark compared to CH’s typical novels, so I did want to put it here and see if anyone else had feedback from reading it. I’m only in the first twenty-ish pages and so far it is leaning like a normal Colleen novel. Will I hate it? Should I stop reading?

This was listed on a summer reading list as it was a preorder and it came in in September! Woohoo! I’m waiting to read this next and the premise of it is if America had a royal family. I’m sure it will be a welcomed light-hearted read if I finish Verity. It seems right up my alley so we shall see!

I picked up this book at a local bookstore after I saw that it was based around tiny experiments in your life doing less. I’ll be honest, I don’t love self-help books- but I do love anything that focuses more on rest and doing less so you can do a few things really well. I think it’s the type of book to leave in your car and read at appointments and in between errands.

The Wife Between Us is probably the best book I’ve read this year, so it was an easy “Add to Cart” decision when I saw this was by the same author. It’s a thriller/mystery {my favorite kind of read!} so it’s one I’ll probably read in a weekend.

Then She Was Gone

I picked this up during a Target run with Maxi and it’s another mystery/thriller. I haven’t read anything by Lisa Jewell, so I’d love to know if you all have read this!

The Death of Mrs. Westaway

Ruth Ware is one of my favorites {The Woman in Cabin 10} so I’m excited to read this later. One of my friends said this is great to read around Halloween, so take that for what you will! 🙂 Read while you pass out candy?!

I saw this on The Skinny Confidential’s Instagram and ordered it so fast! It’s a biography of Martha Stewart based on 400-something interviews from her former friends and work partners. Now, this was written in the nineties- just FYI. But this just seems like something fun to read on a Saturday morning.

What are you reading for fall?!